A Connecticut Yankee in California, Week One: research on home ownership, and a few Asian culinary adventures

Thanks to an NEH grant, I just finished up 5 days of research at the Richard Nixon Presidential Library (and birthplace) in Yorba Linda, Orange County, California.

I stayed in Long Beach, which a) enabled me to go to Los Angeles to eat and explore a bit after work; and b) enabled me to experience Greater L.A. traffic (yippee).

I had an off-day on Sunday (I arrived the night before), so I started off by going to a great independent bookstore in downtown LA, The Last Bookstore.  Its in what appears to be an old bank building, and in many ways resembles a smaller version of The Strand in NYC.  My goal was to get a copy of Henry Miller's novel Big Sur and the Oranges of Hieronymous Bosch, since I'm heading up the coast starting Friday.  Or, failing that, Kerouac's Big Sur.  Neither was available, so I grabbed the new Leonard Cohen biography instead.

A man can only spend so much time reading about policy and land-use law, you know?

After the bookstore, I took the advice of friends and drove up to the Griffith Observatory, which provides an amazing view of the city and the Hollywood hills. 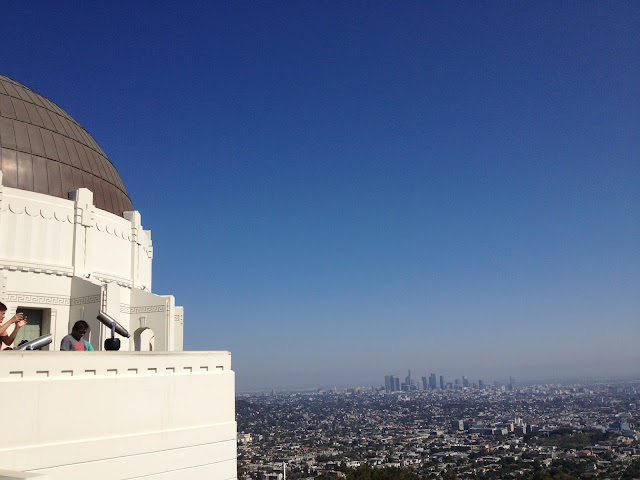 I finished the evening up by trying something new:  yakitori!  I've heard Bourdain rave about it for years, so why not?

And boy was he right.  One of the best meals I've ever had, honestly.  I believe the literal meaning of the word is 'grilled,' but that doesn't quite convey it.  The restaurant, Shin Sen Gumi Yakitori, was small and spartan.  I sat at the counter, and watched the chef grill a very wide variety of different meats on a little brazier right in front of me. 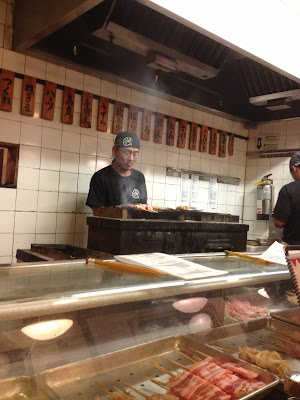 They don't do much with the meat -- just a very simple soy/teriyaki base, as far as I could tell.  But that's part of what was so wonderful about it:  just good quality meat (chicken, pork belly, chicken heart/liver, etc), cooked simply.  In some ways its like Brazilian rodizio, just a bit less gluttonous.

So, what would Nixon do (other than bomb)?

Why did I go to the Nixon Library?

As many of you know, I'm writing a book, Castles Made of Sand?  Home Ownership in the Modern U.S.   The book has two objects (warning, dear reader -- scholar-speak forthcoming.  Viewer discretion advised):

Home ownership is a critical part of daily life for most Americans, and an aspiration for virtually all of them.  It is so ubiquitous, so embedded in our family histories, our economy and our landscape, that it is very difficult for us to see it as an historical artifact – as something created by (and in turn shaping) the choices of individuals and institutions.  Basically, I'm looking to peak behind the curtain, and explore whether there isn't another path.
No post-war social phenomenon has been as critical for social mobility, economic growth, the use of metropolitan space, and political re-alignment as homeownership.  Nearly ¼ of the economy is tied up in residential investment, housing consumption and housing-related expenditures.  Most of the wealth possessed by American families (such as it is) is in the form of housing equity.  Because of how homeownership is geographically structured – often taking the form of suburban sprawl, in metropolitan areas that are segregated by both race and class – it is crucially linked to issues of ecological sustainability and inequality.
One achieves full access to America’s limited range of social rights if one obtains two things: consistent full-time employment, and homeownership. The opportunity to obtain them is powerfully shaped by race and class, but also by where you live. Those with access to these things (and the places where they are found) are able to build wealth across generations, and to make residential choices that enhance educational opportunities for their children. Those without access find themselves both literally and figuratively left behind.
And of course, particularly in recent decades, homeownership has increasingly lashed the American way of life (and family budgets) to global finance.  This has made us more insecure individually and collectively, it has made us more unequal than ever before, and it has made financial capital so politically powerful that none of us can miss the stench emanating from the Augean stables in Washington.
So why Nixon?
My hypothesis is that the 1966-1975 period was a critical stage in the development of our present social geography, and the political economy of home ownership, but that it also had embedded within it a ‘path not taken.’   It remains the only period in our history (other than 1865-1877, perhaps) when the nation actually attempted to understand and unwind the consequences of our racist history.

Pushed by the civil rights movement, high level figures in both the Lyndon Johnson and Nixon administrations acknowledged the need for a greater federal role in expanding homeownership to low and moderate income citizens, and even contemplated using the lever of the federal purse to desegregate the expanding suburbs along racial and class lines.  These ideas received substantial support among scholars and activists, and by the early 1970s seemed to be making headway in the federal courts.

As I've discovered in my research at the Johnson Library as well as in my work in Yorba Linda this week, there was a palpable sense of dramatic change in the air during Nixon's first term.  What did I look at this week, at the Nixon Library?  Mostly, I looked at the efforts of his Secretary of Housing and Urban Development, George Romney (yes, that Romney) to use federal resources to expand home ownership for working-class people in a desegregated metropolitan America.  For more on this, see my article of last year in The American Prospect.  While this sense of impending change was welcomed by some, it was feared by the suburban white majority, to which both political parties increasingly appealed for votes.

For a variety of reasons this 'open door' slammed shut in the mid-70s, and it has never re-opened.  Essentially, for the first and only time in US history, the federal government appeared to have the resources, the leverage, and the legal, scholarly and political support to begin to unwind the patterns of racial and class segregation in housing (and, by extension, public education).  But it didn’t happen.  By 1975, both the courts and the federal government had fully retreated from all efforts to challenge metropolitan segregation, with dire consequences.  As home ownership was gradually expanded to include growing numbers of black, Hispanic and poor Americans in the last three decades (particularly in the 1990s and 2000s), it was largely facilitated by financial deregulation (which gave them all of the downsides of ownership, and none of the benefits), and built on top of metropolitan segregation.

It is my sense that many of our present dilemmas are rooted in the opportunities lost during this period.  In other words, white privilege has brought the temple down upon itself.  The wages of whiteness, as DuBois once called them, remain of great consequence -- but the pursuit and protection of those wages has been bankrupting, economically and morally.

The Nixon Library itself is a nice place to work, though as my historian readers know, one archive looks pretty much like every other one.  It is plopped down on a very well-policed highway in Orange County, on a plot of land that could just as easily contain a strip mall as a Presidential Library.

The grounds are quite beautiful: 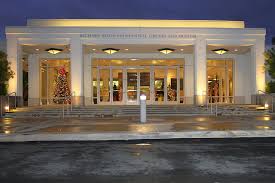 Yorba Linda greeted me on Monday morning with a phalanx of state troopers aiming radar guns at me, like a battery of RPG launchers.  Seemed appropriate, though I am sadly too late to find myself on Nixon's enemies list.

I have always found Nixon to be a sad figure; surrounded this week by photographs and paintings of the man, there is an almost palpable melancholy that seems to weigh on him. 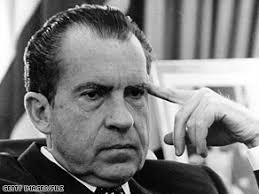 At least that's what I saw.  And the whole thing was quite discomforting, because of my own reaction:  rather than feeling empathy, I experienced revulsion.  I realize this visceral reaction on my part is probably political and ideological -- but it caused me to spend as little down time as possible at the Library.  When I wasn't researching, I sat outside in the sun.

My closest encounter with Nixon was in the bathroom.

I was standing at the urinal on Tuesday morning, when I absentmindedly glanced to my immediate right...and saw a Nixon impersonator staring right back at me.  I thankfully had the presence of mind to keep myself aimed in the right direction, though a liberal like myself doesn't get many opportunities to literally piss on Richard Nixon.  He winked at me (a bit skeezy, that), and headed out.  Apparently Tuesday August 13th was 'meet the president' day for children visiting the Museum.  One hopes their response to him was a bit more continent than mine.

On my last day in the Los Angeles area (today), I headed up to Malibu to visit the Getty Villa Museum.  I once visited this gorgeous place back in 1984, when I was 17, but aside from the reflecting pool and the breathtaking view, I have little memory of it.

Here's a brief video history of the Getty, if you're interested:


It has changed quite a bit in the intervening decade (as have I).  The Getty is now exclusively dedicated to statuary and artifacts from the ancient world, where once it contained a variety of European paintings and furniture.  But the beauty of the place remains, as you can see in this photograph of the Outer Peristyle: 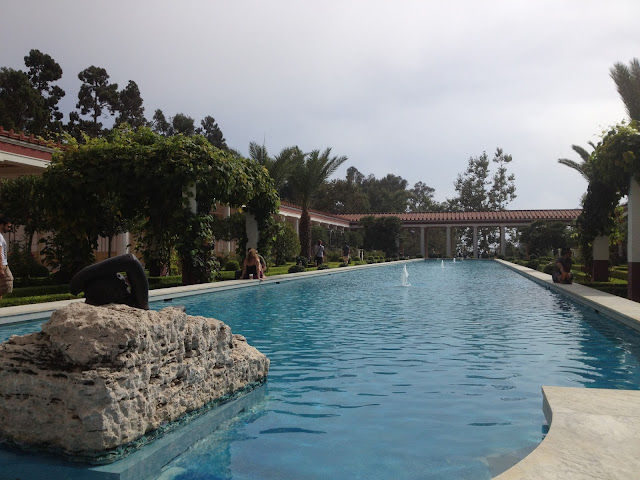 Getty himself was an oil baron, and one of the world's first billionaires.  He was notoriously cheap -- he once refused to pay ransom when his son was kidnapped -- and learned Arabic so as to more effectively bilk the people of Saudi Arabia out of their natural resource inheritance.  But Getty was also a scholar and admirer of the art of the ancient world, and sought to place his personal collection in a replica of the Villa dei Papiri (House of Papyrus scrolls, basically), which was destroyed by an eruption of Mt. Vesuvius in 79 A.D.  The idea was for those who saw his collection to get a sense of how such things might have been placed in an actual Roman villa two millenia ago. 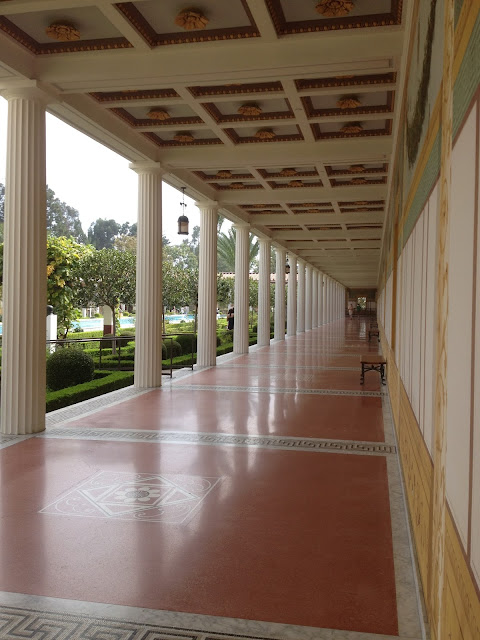 I decided to go here today, seeking a sublime zen-like moment, preferably in the sun.  And I found it. 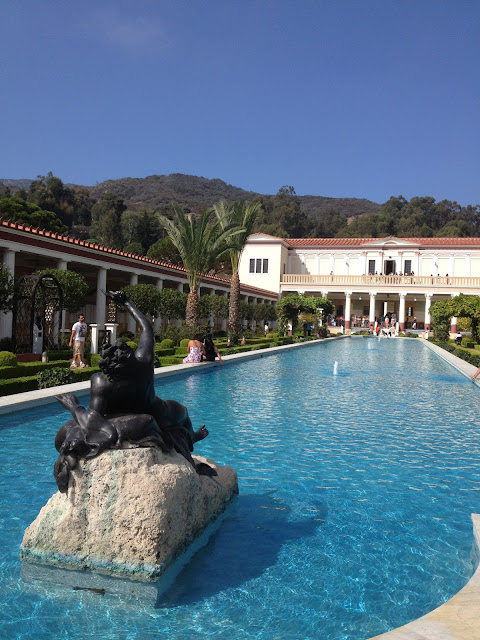 Aside from the placidity of the Peristyle, I think my favorite space was the one with the statutes of the Greek Muses -- which included Clio, the Muse of History: 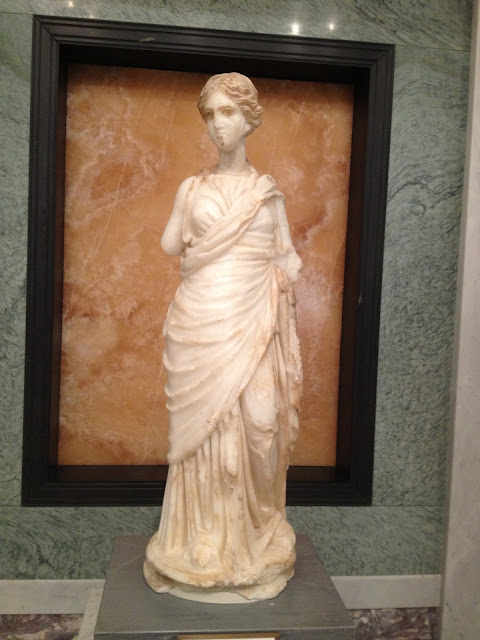 Shana arrives tonight, and we drive up the coast toward the Bay Area tomorrow, bringing the work portion of this trip to an end.