Yesterday, the National Research Council published a massive 464-page report that looks at the extraordinary four-decade rise of incarceration in the United States and concludes that all of its costs — for families, communities, state budgets and society — have simply not been worth the benefit in deterrence and crime reduction.  The report, which was commissioned by the MacArthur Foundation and the National Institute of Justice, is a devastating confirmation of the ground-breaking work of Heather Ann Thompson, Michelle Alexander, Bruce Western and others on the American mass incarceration state -- what Alexander has called 'the New Jim Crow.'  Emily Badger has a good summary of it in today's Washington Post.

1 out of every 100 American adults is now in prison or jail -- the highest in the world, and 5 to 10 times higher than other Western democracies.  Nearly 1/4 of the world's prison population is in the United States.  But this actually undercounts how many of our citizens are caught up in this system, because it doesn't include people on probation or parole: 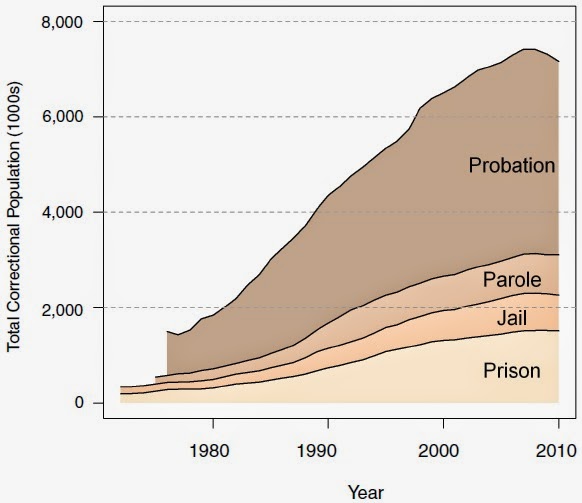 One must keep in mind that most of those nearly 8 million people are young, black or Latino, and swept up into the criminal justice system because of small-scale drug possession crimes and racially-targeted policing.  The consequences, for these individuals and their families and communities, are devastating:  they lose access to public housing, student loans, Food Stamps, and -- in far too many states -- the right to vote and serve on a jury.  They also generally lose access to employment.

If a nation's government budgets tell us something about what that country values, what Americans now care about is abundantly clear:  militarism abroad, and incarceration at home.  State spending on corrections has increased 400% since 1980, with state prison populations growing by 475%.  This has taken place during a time of declining crime rates -- and there is no evidence that mass incarceration has contributed in any way to that decline.  There is plenty of evidence of its devastating impact on families, communities, and public priorities.  The vast majority of these arrests have been for small-time drug violations, particularly for people of color, even though their use of illegal drugs is no greater than that of whites. 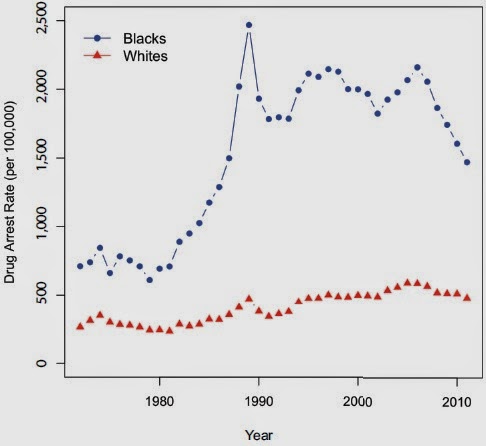 Stunningly, in many states the criminal justice system has become the primary provider of health care, substance abuse treatment, mental health services, job training and education for low-income adults.  If you've ever wondered where all the funding for public higher education has gone, the answer is clear:  the mass incarceration state.  This is just as true in blue states like Massachusetts, as it is in red states in the South and West.

Much of the barbarity of American life in recent decades has been revealed in the past 10 days, in all of its ugliness -- the mass incarceration state, the death penalty, and the willful racial ignorance of those who interpret our laws. My country tortures (its own people, as well as others), condemns millions of children to lives of poverty and ill-health, and maintains a racial caste system with the taser, the gavel, the syringe, and the morally abhorrent myth of its own color-blindness. It also auctions off its political system to the highest bidder.  As I get older, I'm finding it harder and harder to even understand, let alone feel, patriotism.
Posted by Mark Santow at 10:46 AM

Rick Wershe, better known to the public as "White Boy Rick", is currently serving a life prison sentence in the Michigan Department of Corrections for a single drug possession conviction from January 1988. When he was arrested he was only 17 years old. Newly uncovered evidence proves he was led into the life of being a teenage drug dealer by the federal government. Rick was recruited by a narcotics task force made up by the FBI, DEA, and several Detroit Police Department detectives in 1984 as a 14 year old juvenile, encouraged to drop out of high school and eventually put to work as a paid undercover operative in some of the state's most dangerous criminal organizations for the next three years.
Following his conviction, he was sentenced under Michigan's ultra-tough "650-Lifer Law", a law erased from the books in 1998, allowing him to be eligible for parole.In the three times before the parole board in the last decade, he's been rejected every time. As of 2012, he was the only minor sentenced under that law in the whole Michigan prison system that remains behind bars. He is also the only person in the country convicted as a minor for a non violent crime facing the prospect of serving a life sentence.
In the 25 years Rick has been incarcerated, he has cooperated with law enforcement extensively. Prosecutors have said that without his help, the largest police corruption case in Detroit's history would not have been possible. Some of the people ending up being convicted included members of Coleman Young's family.
Rick's situation doesn't feel right in many ways. This site will hopefully educate people who are unfamiliar with his situation , however isn't intended for "fans" to glamorize or endorse his behavior.
Once a boy who made a mistake, Rick is now simply a man in his mid-40's in search of a second chance.

This is a letter from a retired Detroit police officer to the Michigan Parole Board in June, 2012. -> http://i1369.photobucket.com/albums/ag220/Dave_Majkowski/greene_zps6423a7e5.jpg

This is a letter to the Michigan Parole Board from a former FBI agent who worked directly with Rick Wershe when he was working undercover for them and the Detroit Police Department. He is someone who knows the truth and is not afraid to speak up. -> http://i1369.photobucket.com/albums/ag220/Dave_Majkowski/gregg_zps8013fa8f.jpg