Bologna, of course, was to be our Italian home for just over 3 weeks.  But our first real destination after Paris was Venice -- for the Redentore festival.

The Redentore, like most Venetian celebrations, seems to combine the sacred and the profane (or, if you prefer, piety and party).  It honors the end of the plague of 1577, one of the city's worst.  In an age before clean water, contagion and public health were fully understood, cities were frequently devastated by plagues and outbreaks of disease.  This was true well into the 19th century, in the US and elsewhere.  Venice was particularly vulnerable, because it was an island, and it was so well connected to other places through trading ships.  The 1577 plague is believed to have been caused by flea-infested mice brought over on Venetian ships returning from Asia.  One popular story, perhaps true, is that the plague was brought to an end when hundreds of cats were brought in from Syria.  Many at the time (and since) think that constant public devotions by the survivors in Venice's many churches did the trick.

History aside, the Redentore is celebrated with a massive fireworks display, and a huge city-wide party, most of it taking place on a makeshift flotilla of boats loosely attached to one another.  What better way to celebrate the end of a plague than to drink and blow sh*t up?  How could we be in Italy, and miss that?

Shana, as always, captured the essence of Venice -- and our visit -- in photographs.  To see more pictures, go to

Our hotel, the Caneva, was a bed and breakfast near the Rialto and Piazza San Marco: 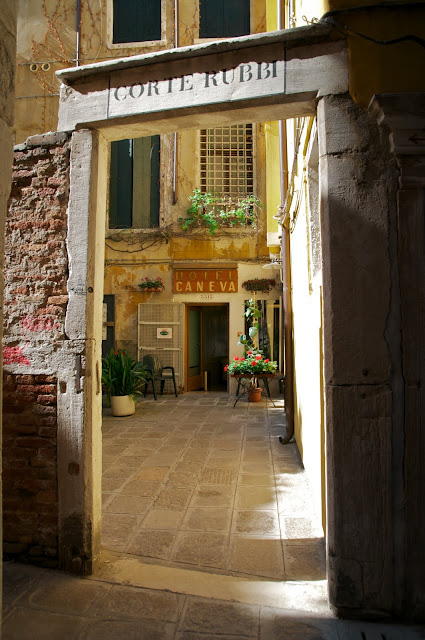 Venice, as I'm sure you know, is a remarkably unique city.  There are no streets, in the modern sense -- at least not any passable by cars.  Transportation is either on foot, or on boats.  It is also next to impossible to find your way around Venice without a map.  In my experience, most visitors just voluntarily lose themselves in the maze.  That's really the best way to see Venice, because there are constant surprises around every corner.   It is a heavily touristed city -- the permanent population is small, and getting smaller as the island sinks and the water rises -- but one can suddenly and inexplicably find yourself alone, if you wander far enough.

Venice had the hottest and most humid weather we encountered during our entire 5 week trip to Europe. We also walked more there, by far.  The kids struggled with it a bit, particularly Micah.  But there is something just so enchanting about Venice, which even exhaustion can't diminish.  It reminds me of New Orleans, my favorite American city.  Some of the parallels, of course, are obvious:  low land and high water, the role of Carnevale, the economic dependence on tourism, and the struggle to maintain identity.  But the essential similarity, to me, lies in the beauty of slow, graceful decay that seems to characterize them both.  And even more than most cities, Venice is a tribute to the extraordinary power of human reason, creativity and aspiration. 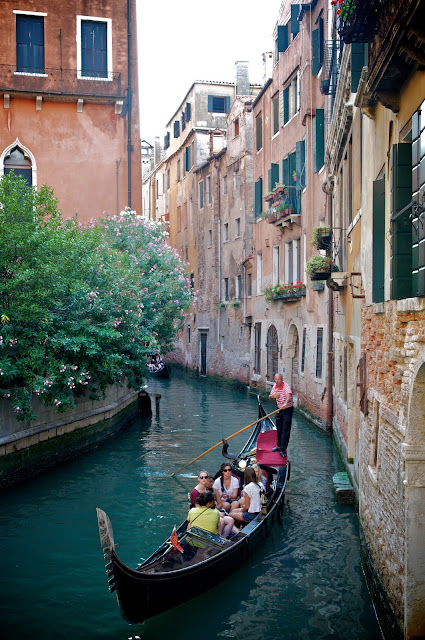 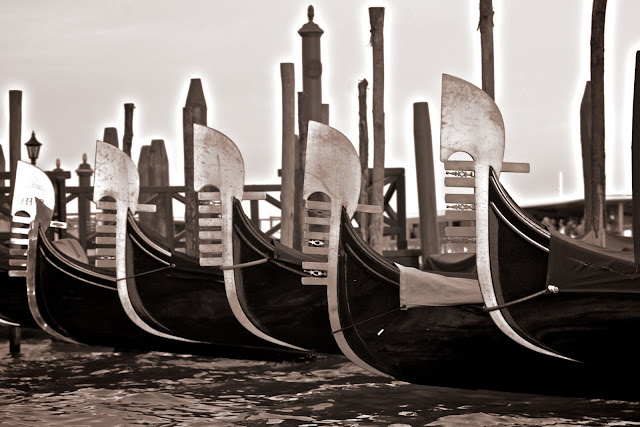 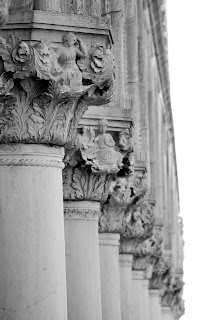 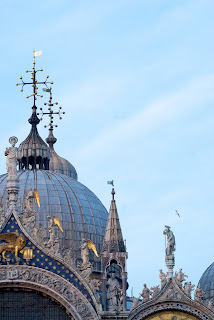 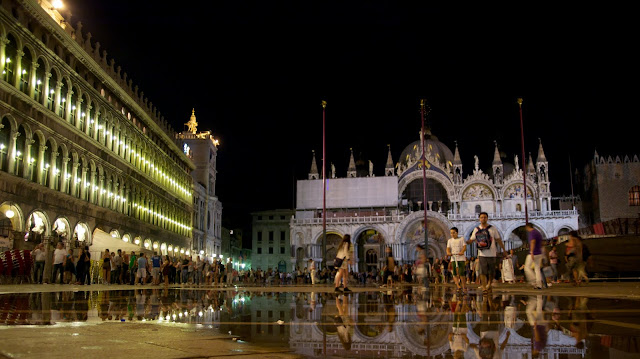 We of course took a gondola ride, with a young gondolier who was clearly itching to get his Redentore festivities started.  He took us along some quiet out of the way canals, and then to the Grand Canal, where people had already begun to lash their boats together and break out the wine. 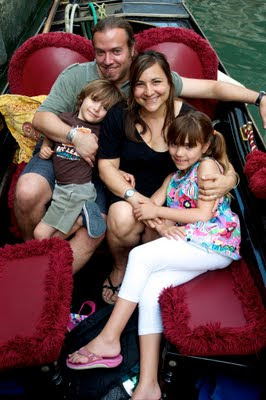 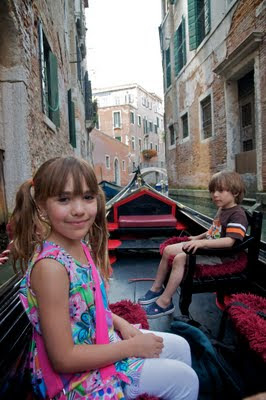 I bought the kids this little Venice treasure hunt book before we left home, and which I highly recommend (they have one for Florence too, I think).  They earned points for learning historical facts, counting winged lions (the symbol of the city), climbing towers, eating gelato, and riding a gondola.  There were also big points for sketching a Carnevale mask, and feeding pigeons in San Marco square. 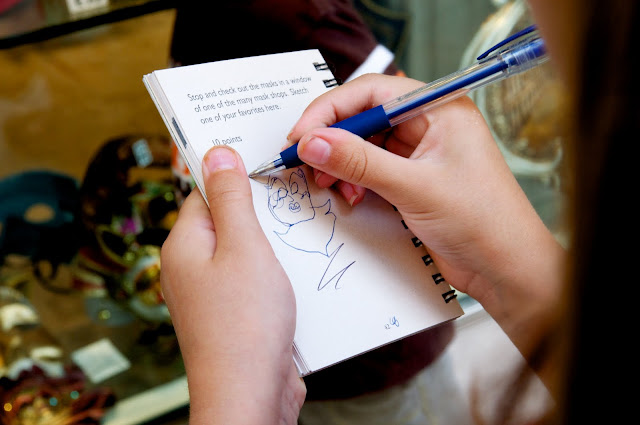 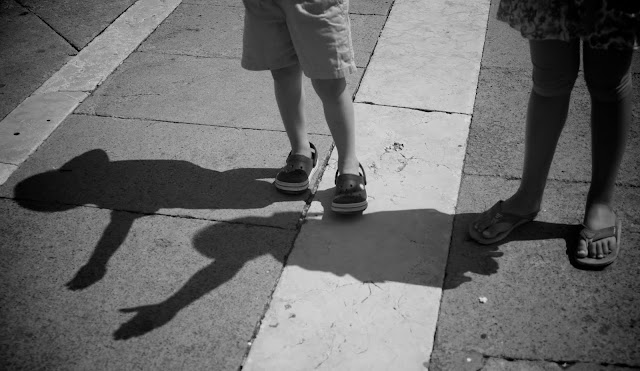 And then, of course, there were the Redentore fireworks in Piazza San Marco.  The crowd was jam-packed, watching the fireworks as they exploded over the water and the party flotilla.  For Micah, of course, a large crowd is a bit intimidating -- someone accidentally pushed his gelato into his face, since at just over 3 feet he flies below radar for most -- but he loves fireworks. 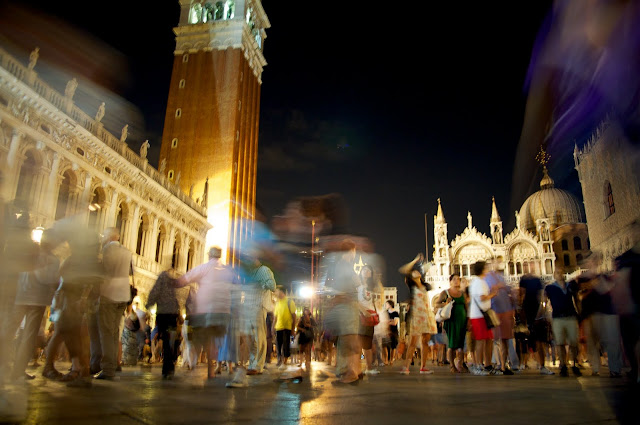 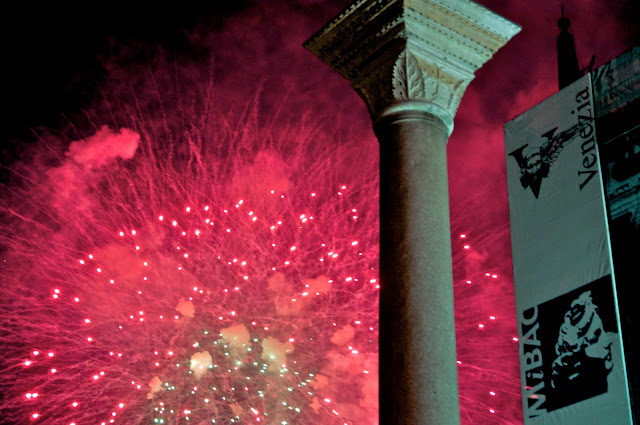 The next day, we took a boat to two lovely -- and uncrowded -- islands near Venice:  Murano, and Burano.

Murano is world famous for glass-making.  Apparently the glass making furnaces were once located in Venice itself, but the size and heat convinced city residents to move them to Murano instead.  While there isn't that much glass actually made there anymore, you can still find some gorgeous stuff in little shops and galleries along the canal.  The island also has some striking public art.  Maya took this picture: 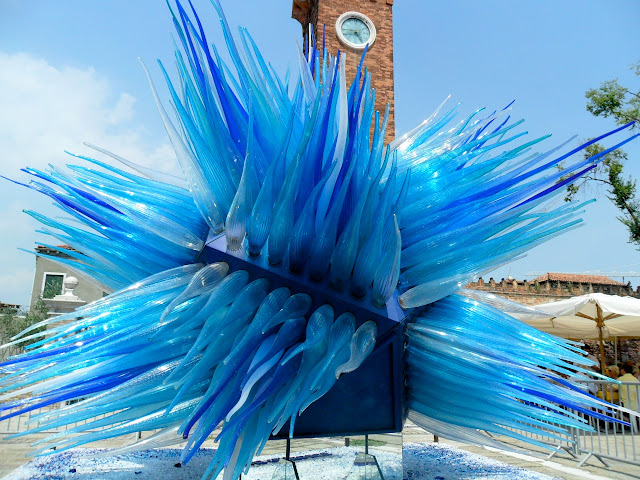 A bit over-heated, the kids managed to find a public water pump in a little piazza off the canal.  They drank, played and splashed in it for an hour -- its amazing how they always seem to be able to find ways to amuse themselves! 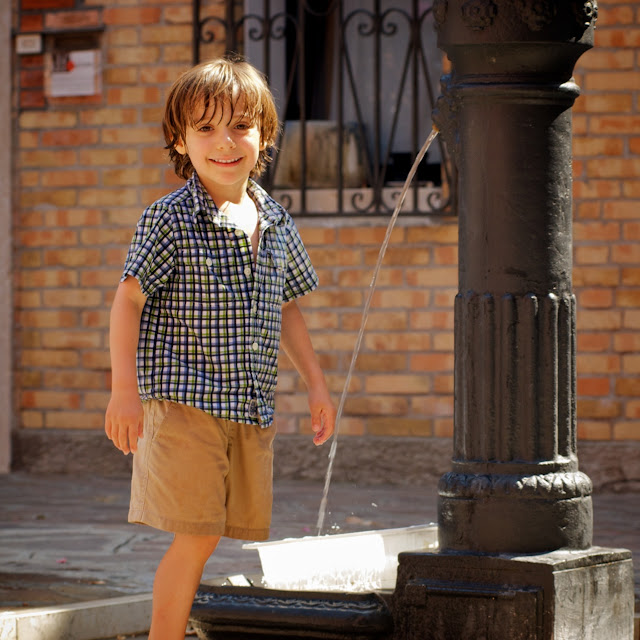 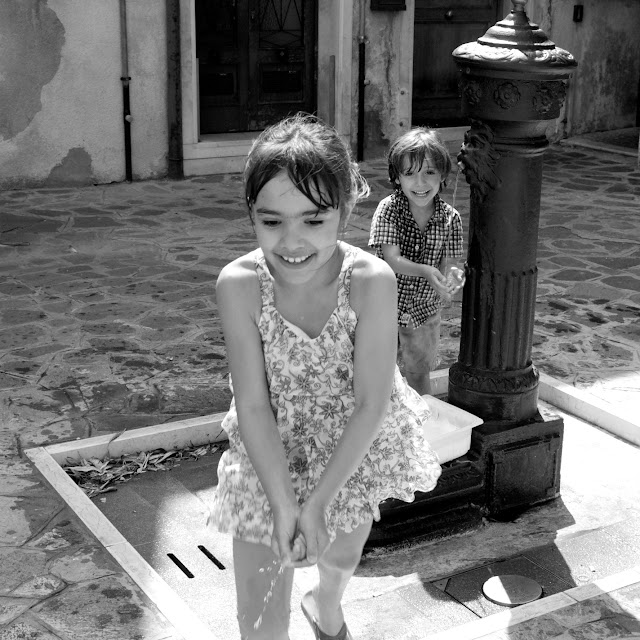 We then hopped back on the boat for the 20 minute ride to Burano.  Our friend Matt had strongly recommended a visit to this smaller island, formerly known for the production of lace.  And Anthony Bourdain has claimed that the seafood risotto he ate there was one of the most transcendent food experiences of his life -- at Trattoria Da Romano.  For a brief film clip, watch this.  I had this on my short list of culinary pilgrimages for the trip (along with Dario Cicchini's Solociccia), but alas, it was not to be.  Unfortunately, we were there on a Sunday, so they were closed.

Most tourists don't think of Venice as a food destination.  But the seafood is excellent, and the tradition of cicchetti is hard to beat.  Basically, cicchetti are little mostly seafood-based snacks that one finds in cafes and bars.  While the seafood theme is pretty consistent, they vary widely from place to place.  You eat them with a beer, or a glass of wine, or a cafe -- tapas style.  I had my fill in Murano (grilled octopus, among other things).  Bourdain has a nice show on all of this.

Probably the most striking thing about Burano, as you can see below, is the variety of colors.  Legend has it that sailors painted their homes a variety of bright colors, so that they could see them as they neared the shore. 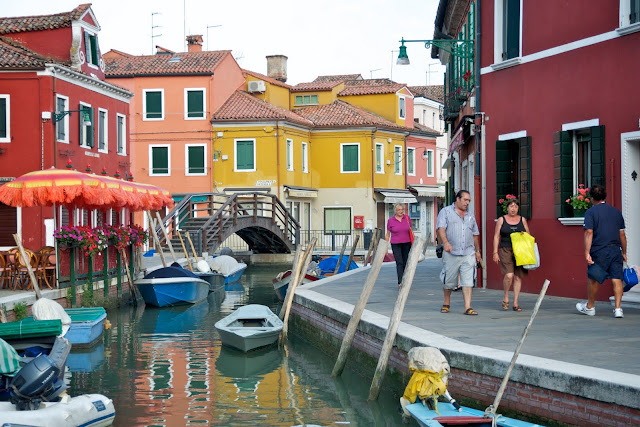 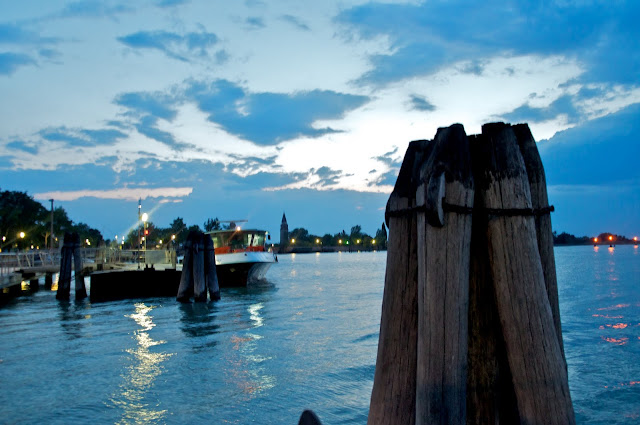 Picture i like most , is the kid in water pump in the little piazza, good contrast, right angle and great moment

such a beautiful place :)
don't forget to visiting back my blog :)